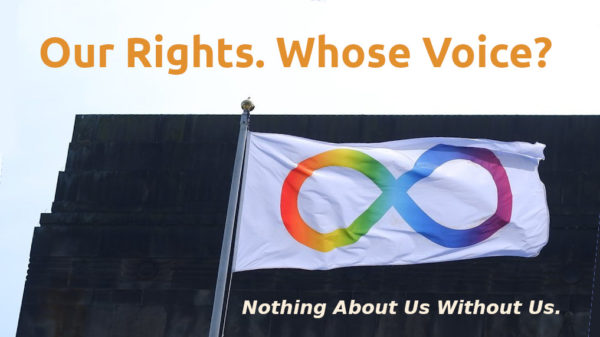 With plans to incorporate the UN Convention on the Rights of Persons with Disabilities (CRPD) into Scots law, and to replace the expiring Scottish Strategy for Autism with something new, this is a critical time for autism policy in Scotland.

There is an urgent need to make sure politicians know that autistic and other neurodivergent people are capable of speaking for ourselves, and that one of the worst things that happens to us routinely is other people speaking over us while claiming to speak for us.

The autism field is dominated by charities run by non-autistic people, too often with minimal autistic input. Some of these charities have been getting better at listening to autistic people; Scottish Autism has recently made a very welcome commitment to inclusive governance, and is currently looking for trustees ‘with lived experience of autism.’ All of these charities still have some way to go before they can claim to speak for autistic people, and usually they do not explicitly presume to do so.

So when three charities that are not run by disabled people put out a campaign called something like ‘Our Voice Our Rights‘, it is important to look closely at who they are actually speaking for, and who they are speaking over. Autistic people’s representative organisations in Scotland are opposed to anything which conflates autism and learning disability, because these are fundamentally separate things, and dealing with them under one heading has regularly been bad for autistic people and those with learning disabilities. It also ignores the place of autism and learning disabilities in neurodiversity more broadly: the overlaps and connections with ADHD, dyslexia and other developmental differences.

Please sign this petition, and contact political candidates and elected representatives to tell them they need to listen to actual autistic people when it comes to autism. We are calling for a Neurodiversity Commission to protect the rights and raise up the voices of all neurodivergent people, including autistic people and those with learning disabilities. The ideas put forward by NAS, Scottish Autism and ENABLE Scotland include many good points, but they risk doing more harm than good. Disabled people need to lead the conversation: our voices need to be listened to when it comes to our rights. The CRPD demands nothing less.

The big charities’ campaign has been using the hashtag #OurVoiceOurRights. Please join in the conversation on there if you’re on Twitter, and add the hashtag #OurRightsWhoseVoice to draw attention to the problem of neurodivergent people being talked over. We have invited these charities to join us in calling for a Neurodiversity Commission.

If you’re in Scotland, here are some ways for you to reach politicians:

The CRPD aims to enshrine in international law the principle nothing about us without us. The Scottish Government is a signatory to this Convention, and has announced plans to incorporate it into domestic law in the coming parliament if re-elected.

It states that disabled people should always be closely consulted and actively involved in decisions made about us (Article 4.3), by state bodies and any organisation providing public services. Representative organisations are a key way to do this: Disabled People’s Organisations, made up of people who are from, and accountable to, the relevant populations.

The Scottish Government has made some moves to include autistic voices in things about us in recent years. The danger is that sometimes this means just one or two autistic people, chosen by non-autistic people, and decisions still being made before consulting anyone who is autistic themselves. Often, any consultation is only on a few details, and even then we are not always listened to.

So there is some way to go yet before the government lives up to the CRPD’s requirements, and the same goes for other bodies providing public services, like autism charities. These things take time to build, and in some ways the idea of centring autistic people in decisions about autism remains revolutionary. Historically, the views of ‘autism professionals’ have taken precedence over those of parents with autistic kids. The views of family members, in turn, have frequently crowded out those of actual autistic people.

This has often worked out badly for autistic people, and usually hasn’t been great for families either. Autistic people are the leading experts on autistic experiences, but all of these groups have something to learn from the others. We need dialogue, but above all autistic people need to be listened to, which is why we wrote a guide to including autistic people in decisions about autism at About Us, With Us.

Scottish Autistic People’s Organisations AMASE, ARGH, Triple A’s and GARN are campaigning for a Neurodiversity Commission or Commissioner to safeguard the rights of all neurodivergent people – everyone with a developmental disability, whether that be autism, learning disabilities, ADHD, dyslexia, dyspraxia or something else. There is so much overlap between these population’s that anyone deciding things about one really ought to understand the others too. A Neurodiversity Commission would also build the idea of neurodiversity into a public body, marking an official recognition of the important idea that different people process information differently, and that this is not necessarily a bad thing even though it makes some of us disabled in this society.

A Commission on its own is obviously not enough, however, even if it is done right. Existing government departments and Commissioner offices should employ multiple neurodivergent people as consultants to further the goals of inclusion and equality. Autism charities must be accountable to autistic people, who should be involved with every stage of policy formation and content creation relating to autism. Representative organisations should be consulted throughout.