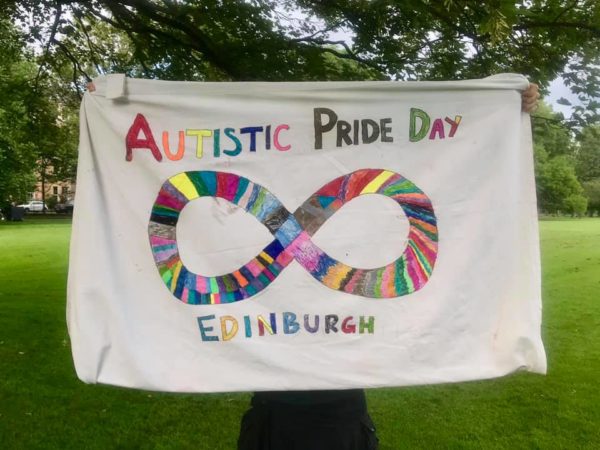 AMASE was first started in 2017, and constituted as a Voluntary Association in 2018.

In 2016, Sonny Hallett and Fergus Murray attended Autscape, the UK’s annual conference and retreat run by autistic people, for autistic people (that year it was on the theme of identity). This provided a glimpse into the power of autistic community – what it is like, as an autistic person, to have the chance to be around a lot of people who have had similar experiences to yourself, and to learn from them.

The year before, they had attended a ‘Late Diagnosis Group’ at Number 6, Edinburgh’s Autism One Stop Shop. At that time, the group was run by a non-autistic person, and not directed towards autistic people learning from each other. After seeing the power of autistic space at Autscape, Sonny and Fergus volunteered to run add-on sessions for some of these groups, and then to run a whole Autistic-Led Late-Identification Group (ALLIG) at Number 6.

Following discussions with some of the people who attended those groups, the idea was hatched that we should set up an organisation together, and deliver a workshop in its name as part of Edinburgh University’s Festival of Creative Learning. At our founding meeting in November 2017, we agreed a name and a set of organisational priorities. The next ALLIG was also delivered as AMASE, and we started putting together things like our Autistic Glossary and an open letter to the Scottish Government (co-signed with ARGH) about a poorly designed 2017 consultation on the Scottish Strategy for Autism.

In July 2018 we ran Edinburgh’s first Autistic Pride Day picnic, and went on to have a meeting to agree on our constitution and formally elect our first committee, with Sonny as Chair. We started inviting members in early 2019, and had more than 100 members by the end of our first year. In 2020, Fiona Clarke and Leo Starrs-Cunningham joined the committee, and Fergus was elected Chair; in 2021 Gideon Henner joined as well. As of the time of writing (2022-07-24) AMASE has over 200 Full Members (who are autistic and in Edinburgh or nearby) as well as more than 100 Associate Members.